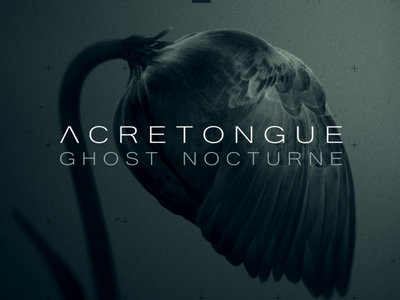 Regular version of ACRETONGUE’s long overdue 2nd album. It has taken Nico J. seven years to find the sound and the shape of a successor for his brilliant debut album "Strange Cargo", released in 2011. The long awaited follow up matches the high expectations with ease. "Hypnotic" is the first word that comes to mind, when you intend to describe the music's reach and effect, but "Ghost Nocturne" branches out from there into different territory. Slowly, steadily, carefully Nico J expands his musical horizon.

A dreamlike, hypnotic state always seems to be the entry point of Acretongue's musical effects, but "Ghost Nocturne" is more diverse than its predecessor. Not only in terms of the vocals, which come across more varied, but also in the different ways in which it sets up its rhythmic structure and pace. The compositions surround its listeners like dreams, sometimes weird, sometimes upbeat, sometimes in slow pace, but always with surreal yet careful electronic precision and warmth. An electronic music Nocturne.