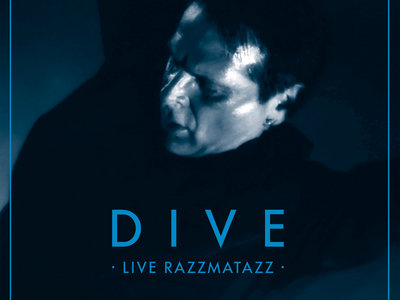 Dive needs no introduction. Frontman of Belgian EBM prime-movers The Klinik and the seminal minimal-synth act Absolute Body Control, Dirk Ivens started to work under this moniker in 1990 and has released a long list of albums and EP’s on a wide number of labels including Minus Habens (Italy), Daft Records (Belgium), Discordia (Germany) and recently Out of Line (Germany). Dive is a sharp mix of industrial, EBM, noise and experimental sounds with abused drum machines, pulsating distortion and an unmistakable voice.

This live show recorded on the famous Razzmatazz in Barcelona on April 2003 shows Dirk at the best of his fruitful career including some of the most iconic Dive tracks, such as:

“Final Report”, “Sufferhead”, “Power of Passion” and others.

All tracks played and produced by Dirk Ivens, except bassline B2 and additional electronics A1, A3 by Eric Van Wonterghem. Music A5, B1, B4 by Ivan Iusco. Mastering by Nico DeadWax. Cover photo by Gabriel Edvy.