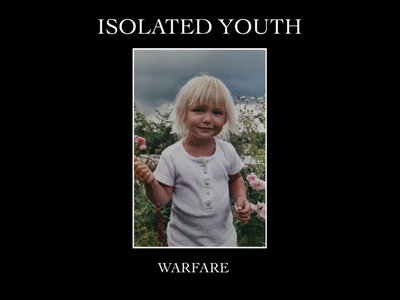 Limited Edition of 500 copies with innersleeve and download link.

Isolated Youth were formed in a small coastal city just north of Stockholm on the first of March 2017 by brothers William & Axel Mårdberg along with Egon Westberg Larsson and Andreas Geidemark. Since then, the band have made a number of performances, acknowledged for their intense yet beautiful live concerts. Their sound is reminiscent of what postpunk once was, but Isolated Youth has their own distinctive and original approach. The vulnerable fragility and soaring beauty in the vocal notes collide with ringing guitars, playful, but strong and evocative, base lines and haunting drums. The lyrics circle around themes like the ever-present search for an escape from a harsh world and the desire to protect one’s dearest from harm. The lyrics depict brutality but also ever-lasting emotional bonds.

Now, as they reach an international audience the band releases the 5-tracks Mini-Album “Warfare,” which captures the essence of Isolated Youth.