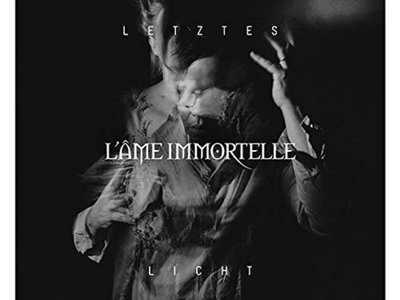 For more than 22 years now, L’ÂME IMMORTELLE have been enriching us with their deep, sensual cascades of sound, full of spellbinding emotional worlds, melancholy and consuming passion. No other band comes even remotely close to forging important topics such as death, parting and forgetting into such an aesthetic, artistic form as this Vienna duo has been doing since they very first got together.

Protagonists Sonja Kraushofer and Thomas Rainer touch us once again with an emotional journey into the depths of their soul. Recordings for L’ÂME IMMORTELLE’s most recent masterpiece ‘Hinter dem Horizont’ were completed in autumn 2017, with the album being released in January 2018. “At the start of this year we toured the album and presented the songs live, whereby a relatively large proportion of the new songs wormed their way into our setlist and above all into our hearts,” reveals Sonja. “We revived them anew at every concert, reinterpreting them and discovering more in them than was actually apparent during the actual studio recordings. They have become a part of us,” reflects the woman with the epic voice, allowing her thoughts to wander: “On stage, a piece of the present, on the album a piece of the past, so why not have them accompany us for a little into the future…?” And that’s what they’ll do – in the form of an enchanting EP. As a line in the song ‘Last light’ goes, “It’s extremely difficult to let go of memories.” So L’ÂME IMMORTELLE decided to round off ‘Hinter dem Horizont’ both visually and musically with the EP ‘Letztes Licht’. Some new songs came into being, which walk the tightrope between hope and longing, but the classic ‘Fear’ was also worked up, rearranged and recorded in an electronic version, in order to assume its live character. “What’s more, we also had musician friends remix or cover some of the older songs that have constantly accompanied us over the years,” adds Sonja. With ‘Letztes Licht’, which was produced by Krischan Jan-Eric Wesenberg (ROTERSAND), L’ÂME IMMORTELLE embark on a journey dedicated to those special, unforgettable sequences of their history, but which at the same time also represents a dynamic step forwards.